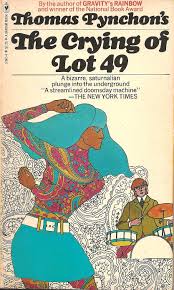 The Crying of Lot 49 by Thomas Pynchon (1966): Pynchon’s second novel, a slim offering of 183 pages, offers a portrait of the period between the counter-cultural explosion of the 60s and the “paranoid style” of the post-Watergate 70s. Oedipa Maas finds patterns in the signs that surround her, and becomes aware of a secret postal network called W.A.S.T.E. (“We Await Silent Tristero’s Empire”). This points to a vast conspiracy. The book ends ambiguously. Pynchon’s secretive nature (there are no photographs of him, for example) have led to speculation that his works are pseudonomous works by another author. The recurrent theme of conspiracies led some to believe that he was in fact Robert Anton Wilson, who we will meet below. This is clearly not true, not least because Pynchon continues to publish while Wilson died in 2007. Nevertheless, for Lot 49 the idea was believable, especially with the Californian setting and unwieldy character names. But Pynchon’s prose developed into something more complex than Wilson would ever achieve. His next novel, Gravity’s Rainbow, despite certain thematic similarities, was a modernist sprawl, with echoes of James Joyce and Umberto Eco. Indeed, conspiracy and paranoia are themes which run through his books; but for my money, this is the place to start. 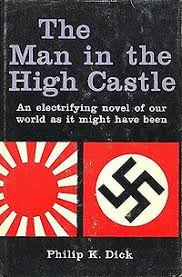 PKD’s novels exist in the same acid-fried, sun-kissed California as Lot 49, where the 60s’ battles over epistemic hegemony led ultimately to a hermeneutic of suspicion in general. You start off challenging The Man, but the logical conclusion is to question everything, and in PKD’s many novels, this takes the form of questioning the nature of reality itself. This takes various forms; Decker discovers he’s a replicant designed to believe he’s human; the implanting of fake memories a cheap alternative to holidays; the gradual discovery that you are dead and experiencing a sort of collective hallucination. Often, this questioning of reality takes the form of conspiracies. In The Man in the High Castle, set in an alternative history where the Nazis won WWII, all of history since then is revealed to be a fiction.

Illuminatus! by Robert Shea and Robert Anton Wilson (1975): PKD’s Californian contemporary Robert Anton Wilson took the hermeneutic of suspicion to a deeper level. While PKD’s experience sent him into an ever-deepening quagmire of metaphysical speculation, RAW’s similar experience caused him to relativise all viewpoints as equally subjective.

he Da Vinci Code by Dan Brown (2003): There are successful novels, and then there’s The Da Vinci Code. Over 20 million copies sold, not counting his other four novels, and a successful film. The prose has been widely criticised, and not unfairly, but this is to beggar the two legitimate appeals of the book. Firstly, it’s structure is utterly compelling, which coupled with short chapters which always end in a cliffhanger make it difficult to stop reading. Literary crack. But secondly, and perhaps more importantly, it caught the zeitgiest.  So much so that women were buying a thriller, and what’s more, men were buying a thriller about a homosexual painter and the Catholic Church. The appeal is harder to quantify, I think, than is generally acknowledged. The call for the “sacred feminine” is part of it, of course. But at least as important is the critique of power structures. The conspiracy to suppress the divine feminine, Brown tells us, is the result of the patriarchal power structures of our society. The critique of these ingrained power structures is ongoing, evinced by the Occupy movement, widespread rioting in Europe over financial practicies, and the popularity of Zeitgiest and Alex Jones. Like the New Age movement, The Da Vinci Code is mostly popular in Protestant countries, yet the “big bad” is always the Catholic Church. Why? Because the critique has nothing to do with spiritual beliefs. I think it has more to do with the critique of patriarchy, hierarchical power structures and other epistemological authorities perceived as unfair and anti-individual.

984 by George Orwell (1949): The daddy of them all. 1984, Orwell’s last novel, is not only considered one of the finest English novels of the 20th century, but is considered by conspiracists to be a perfect prediction of our modern world. As Alex Jones puts it, “The answer to 1984 is 1776”, the date of the signing of the Declaration of Independence. Indeed, it was so prescient that it is sometimes suggested that Orwell was “in the know”, and even that he may have been killed for writing this. Set in an alternate post-War socialist Britain, 1984 is the story of Winston Smith, who works for the ministry of truth, removing “unpersons” – dissidents – from history. Such is the control exerted on the state by the Party, and their distant leader Big Brother, that they control language itself, with English reduced to Newspeak, so simple that it prevents complex thought. The world is divided into three superstates, of which two are at any given time at war with the third, although those partnerships are constantly changing. Though he is already defying Big Brother by keeping a diary, Winston’s rebellion flowers when he falls in love with a junior Party member named Julia. As a result of their love affair, he is arrested and tortured in Room 101, and finally forced to love Big Brother, to love the Party. Many consider 1984 unbearably pessimistic, but it is often overlooked that the epilogue is a history of the rise and fall of Newspeak, and thus makes it clear that IngSoc was a temporary and ultimately failed experiment. The proles, ultimately, prevailed.

Although Illuminatus may have beaten him to the  “What if it was all true?” motif, Eco’s novel offers a literary counterpoint to the pop-culturgasm of the aforementioned novel. Three academics invent a conspiracy, and it comes true. Did it come true, though, or is it a comment on not only our construction of conspiracies, but all Grand Narratives, historical or otherwise? Eco’s novel is Illuminatus! for the postmodern – if history is a bunk, if subjectivity is a bunk, what if objectivity is a bunk?

POSTSCRIPT: Both Eco and Pynchon have returned to the issue of conspiracy in recent works, which I haven’t read and so cannot comment upon. But my suggestion in this article, and the blog generally, that conspiracism is a major feature of contemporary culture, seems confirmed. Popular art reflects the broader social epistemology.

Have I missed any great conspiracist novels out? What about movies (could be a future post)? Answers in the comments below…