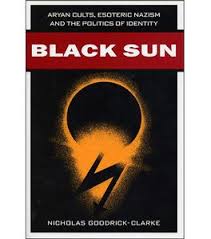 Black Sun is the successor to Goodrick-Clarke’s now-classic The Occult Roots of Nazism (1985), which charted the influence of the Volkisch movement and anti-Semitic esoteric groups in the development of Nazi ideology between the world wars. The present volume charts the same currents after the war, particularly among neo-Nazi groups in the US and Europe.

The opening chapters present potted histories of the neo-Nazi scene in the US and the UK, which helpfully set the scene, and outlining the general context of what is to follow. The book then jumps back into some pre-war influences on later neo-Nazism, and these chapters contained the bulk of the most interesting material. These included Italian Futurist and Traditionalist philosopher Julius Ebola, Savitri Devi, who combined Vedic philosophy with a fervent nazism in interpreting Hitler as an avatar of Vishnu and herald of the Kali Yuga, and Chilean diplomat and poet Miguel Serrano, for whom the Aryans were the bearers of light in a Gnostic struggle against the Semitic demiurge. This section also contains detailed accounts of the development of such “occult nazism” narratives as SS missions in Tibet, Nazi contact with extraterrestrials, Vril-powered UFOs and Antarctic U-boat bases concealing entrances to Agartha.

The following chapters detail the emergence of contemporary neo-Nazism among black metal bands and Christian, Pagan and Satanist groups. The final chapter was of particular interest to me, concerning as it did the spread of right-wing and anti-Semitic ideas among conspiracist circles. The chapter focuses on David Icke and Nexus magazine, two regular subjects of my work. He is of particular interest to me in outlining the links between these ostensibly left-wing New Age conspiracists and anti-Semitic right-wing groups. Also of interest is the claim that Icke is not himself anti-Semitic, but is being naively used by anti-Semites as a disseminator for their ideas in a left-wing milieu (292).

Like the preceding book, Black Sun is a masterful piece of historical writing – detailed and thorough without ever being dull, and impartial without glossing over unpleasant facts, nor dwelling unnecessarily on the sensational. That having been said, more detailed analysis of the meaning of these beliefs, and a discussion of how esoteric Nazism and neo-Nazism relate to the contemporary world more broadly, would have been welcome, given the book’s subtitle, …and the Politics of Identity. As it is, this material is confined to a four-page conclusion.

Nazism (in all its forms) and esotericism both have serious things to tell us about the broader currents of culture, and particularly so in the nexus between them. I completely concur with Goodrick-Clarke that they are subjects which we marginalise at our peril. Goodrick-Clarke closes with a warning that the far right has gained new vigour since the mid 1980s, due to immigration policy, a situation which he compares to the situation in Germany which gave rise to the Volkisch movement. This situation can only be exacerbated by the recent financial crash and resultant unemployment. With the recent events in Norway, this warning is timely indeed.